A lot of people complain that their Apple TV doesn’t work well, as they wait forever for
music or video to start.  Sometimes it’s that their tablet gets Internet in the living room, but not in the bedroom. This is often a Wi-Fi issue rather than an Apple TV, phone or tablet
problem.  Unfortunately wireless networking isn’t always straightforward. 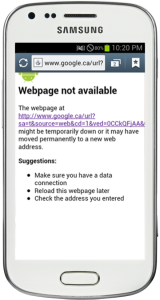 You see, at lot of us think that we just set up our Wi-Fi router somewhere and our home has a magical wireless networking blanket snuggly wrapped around it. For some lucky folks, this may be the case. For most of us though, there are a plethora of issues that can make Wi-Fi less than ideal. These issues include home size/layout, building material, router location, router and interference (microwave ovens, neighbour’s Wi-Fi, etc.).

You may not notice Wi-Fi issues with light Internet browsing or email, but try heavier use like Netflix or iTunes streaming video and you’re experience goes from OK to down right aggravating. Or perhaps some rooms are two thumbs up, but others are left in Wi-Fi wasteland.

So what can you do? Here are some things to try:

You can test out the Wi-Fi in your home using free tools like InSSIDer for Android devices. Sorry iPhone and iPad folks there isn’t a version for you, but there is for Mac and PC. If you use these apps there is no hard threshold, but if you’re seeing something around -80 or less, you’re likely having a pretty poor time with your Wi-Fi. Walk around your home and test Wi-Fi strength for different router locations. 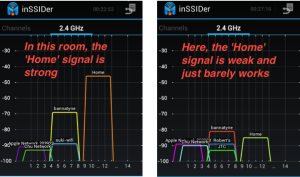 If you need help with any of this, reach out to us and we’d be happy to help plan and update your home’s networking that fits your needs and budget.