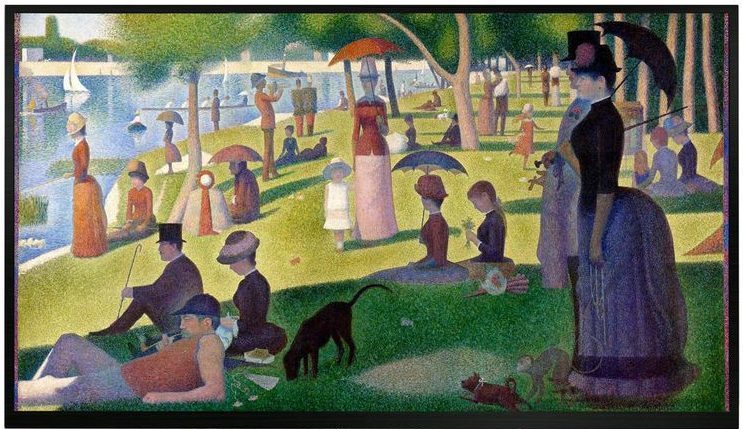 Many of us have a TV screen in our living rooms and other living spaces, but often it’s left as a black void when we’re not watching it. Today’s 4K TVs are thin, have very tiny frames and consume less power, so they open up other possibilities. For those who have Samsung’s Frame TV, they may already have photos or art showing on it, but what can the rest of us do to stream art?

If you have an Apple TV or other streaming

device like a Roku (available both as a separate device or pre-installed in some TVs), then you have options to show photos and stream art. For example, Apple TVs have built in photo viewing for your photos and cool aerial screensaver videos. Otherwise, you can look for other services to let your arty side show.

There are third party art apps, such as Art Authority, artcast, LANKA, 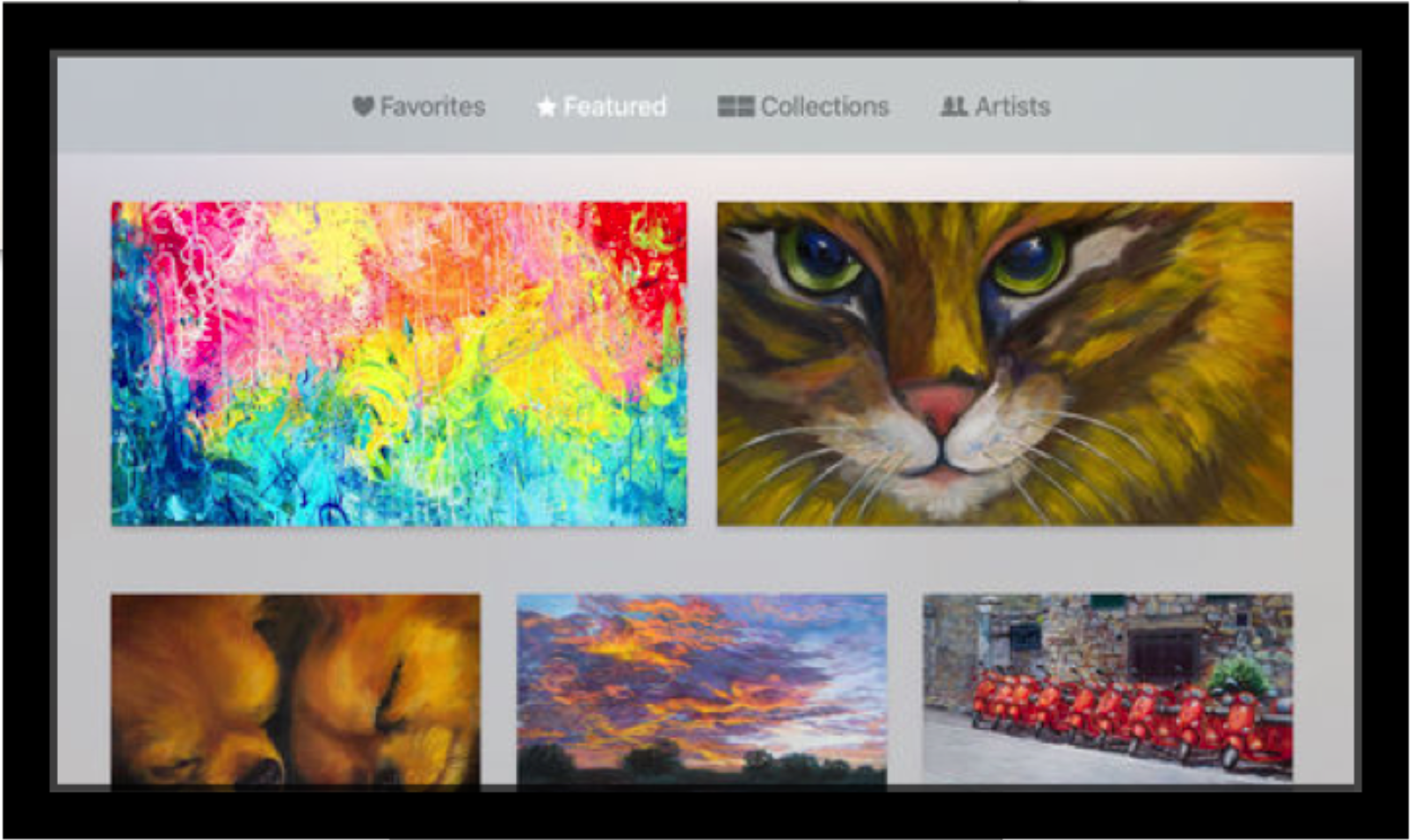 loupe and Mochi. These range from classic museum paintings to modern art. Some are free, and some have ads or require a paid subscription to stream art collections. There are many options, so you can search for one that matches your taste and style. Currently it looks like the Apple TV has the most options, but some TVs like Sony TVs allow for these apps via the Google Play Store.

If you want stream art or show off your photos, then your TV might be just the tool you need. If you don’t already have a media streaming device like an Apple TV, you can add one relatively affordably. These devices consume power, but they’re low enough to guiltlessly stream art when you want to get arty. 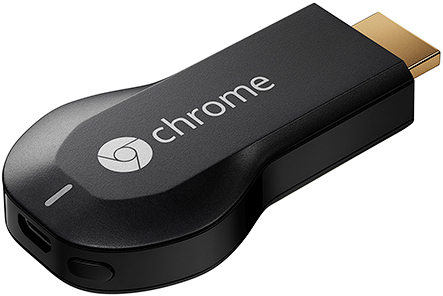 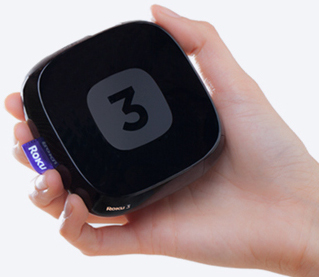 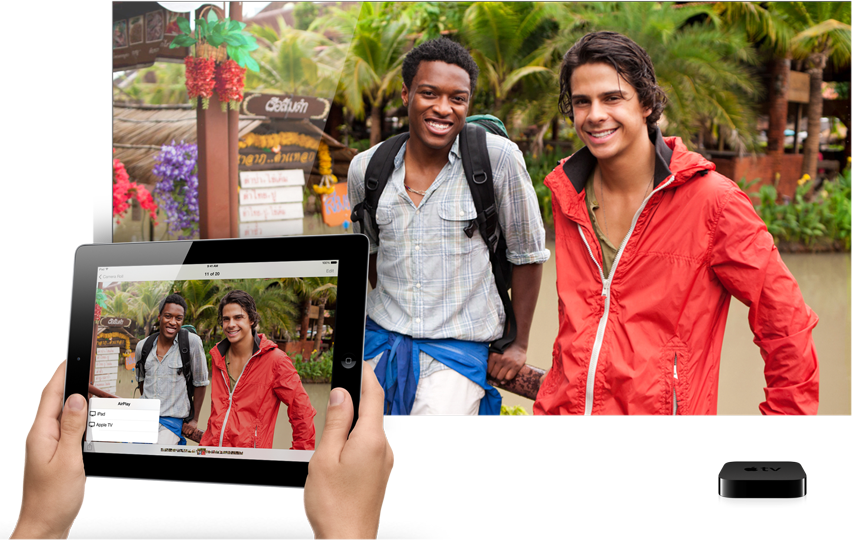 Playing media on your TV from your smartphone or tablet is a handy home tech feature. Perhaps you want to show vacation photos or play the latest YouTube hit for your friends so all can see at the same time. Or maybe you just want to watch your stuff on a bigger screen. There are two families to stream media: AirPlay and DLNA.

Apple created AirPlay for their products. You can stream content from Apple iPhones, iPads and Macs to an Apple TV. In iOS, you can use AirPlay by swiping up from the bottom of your iPhone or iPad screen to access its Control Center. On newer Macs, you access AirPlay from the menu bar at the top. You can use your device for streaming (playing from your iPad or iPhone) or mirroring (mirror its screen to the TV). AirPlay is extremely simple to use, but relies on a solid home Wi-Fi network to ensure audio and video play smoothly. If you are able to connect a network cable to your AppleTV, that would be best, as iPads and iPhone can only connect using Wi-Fi.

If you’re an Android user, you too can stream media, but its usually a bit more involved. There are many versions of Android and compatible TV devices including PS3 and Xbox. They make use of the DLNA (Digital Living Network Alliance) protocol. Streaming from your Android device to a TV can range from simple to beyond frustrating depending on your device and TV. For example if you have a premium Samsung phone and a compatible Samsung TV, you’ll have a fairly seamless experience using their apps. As there is a nearly endless array of Android devices and compatible TV devices, there are too many variants to cover here. Some Blackberry and Windows devices also support DLNA, so you may have compatibility with those devices as well. If you have a hodgepodge of devices, game consoles and TVs, you’ll have to get cozy with Google to figure out the magic steps to get them to play nicely together. As with AirPlay, a good experience with DLNA requires a solid Wi-Fi network.

Although Apple’s AirPlay is mainly for Apple devices, there are apps like Twonky Beam that allow you to use an Android device with an Apple TV. The experience isn’t quite as seamless and flexible, but you should be able to get by. Some audio brands are AirPlay compatible (check out fav #4), but Apple may allow them to include video streaming in the future.

People often have strong opinions that Apple’s iOS or Google’s Android is better, but in general its usually best to stick with one or the other unless you’re tech savvy. Regardless of your tech device religion, get the most out of it including streaming to other screens.

This fun and hip urban couple wanted seamless home tech in their new townhome.  As often is the case, although the home was recently built, it wasn’t well thought out for home tech. The plan was to smarten up the home while maintaining a modest budget. For this project, we worked with Tamara of Philosophy Design to realize the couple’s vision.

The tech updates had three focus areas; the living room, master bedroom and office/spare room. The overarching principles for this update were simplicity, clean lines and minimized tech footprint. As with any update, it was also important to provide a home network to connect all the gear. 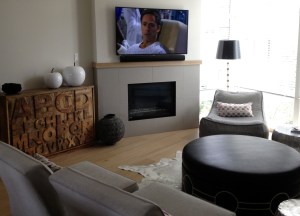 kitchen. Here we mounted an awesome and affordable Panasonic 58” TV and Harman Kardon sound bar over the fireplace. The other gear was discretely tucked away in the funky console and the wireless subwoofer hidden. This was nicely tied together with a Harmony remote. Now the homeowners can watch TV, stream from their Apple TV or listen to music from their smartphones throughout the ‘great room’. 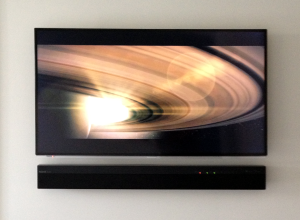 The master bedroom has similar functionality. A Panasonic 42” TV is tidy on the wall with a matching sound bar. Again the TV set top box and Apple TV were hidden away, but this time on a tiny shelf in the walk-in closet behind the TV.

The office space, which also doubles as a spare room, has similar touches with another Panasonic TV and sound bar. A PS3 was desired instead of an Apple TV, so the PS3 and TV set top box were again tucked away in the closet.

We used the office as the hub for wired and wireless networking. The building developer had put the TV, phone and networking panel in the ground floor entry room. This would have been fine, but unfortunately only one networking wire was installed when originally built! Luckily it went to the office/spare room, so we used this to branch out the Internet connection.

Physical network wiring in the office maximized performance there, and we put an excellent Wi-Fi access point to ensure solid Internet access for all the homeowners’ wireless gadgets through the living area. When it’s time to get some work done, a handy grommet is built into the office desk providing power and wired Internet.

A few thoughtful touches round out the home. A Nest Learning Thermostat provides simple temperature home automation including smartphone control while away. Combination USB and power outlets were installed in the kitchen and bedroom for i-device charging convenience

This home tech update provides streamlined TV, music and Internet experiences the savvy couple wanted without breaking the bank. As they just welcomed twin girls into the world, it will also provide a solid base to grow as their digital demands expand.